Growing to 12 feet in length, with powerful jaws and specialized teeth for stabbing and tearing apart its prey, Dimetrodon limbatus was not a creature you'd want to encounter while on a Saturday morning hike. Recently, a fossilized skeleton of the Paleozoic predator was scanned by NVision Inc., a leader in 3D non-contact optical scanning/measurement, for the Texas Through Time museum in Hillsboro, Texas. The detailed scan data will enable the paleontology museum to 3D-print exact replicas of the fossil for further study and education. 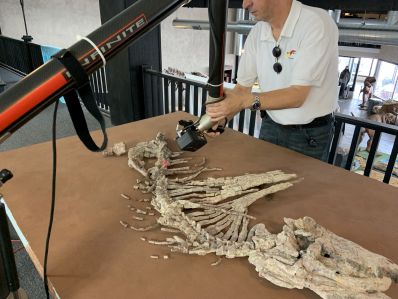 Billed as the "Best Little Fossil Museum in Texas," the non-profit Texas Through Time was created by paleontologist Andre LuJan to preserve and promote the rich fossil history of the Lone Star State. Free to the public, the museum features a wide assortment of fossils from all ages and formations, including many one-of-a-kind fossils not available anywhere else. Although primarily focused on the noteworthy fossil diversity of Texas, the museum's collection also includes fossils from around the world.

The Dimetrodon limbatus, discovered in the Redbeds of Texas in the early 1980s by Jack Loftin of Archer County, Texas, was an apex predator of the Early Permian period, a division of the Paleozoic Era that lasted roughly from 272 -- 295 million years ago.

The vast age and paleontological value of the skeleton -- discovered in a rare death pose -- made copying it for further study and display a priority. LuJan, who had used 3D scanning and printing before, chose to use the same process for the Dimetrodon skeleton as well as several other Permian skulls/skeletons from Texas. "I felt it was absolutely necessary to have these fossils 3D scanned as it is less damaging than traditional molding and casting," says LuJan. Scanning also avoids the use of casting materials that may permanently stain fossils. 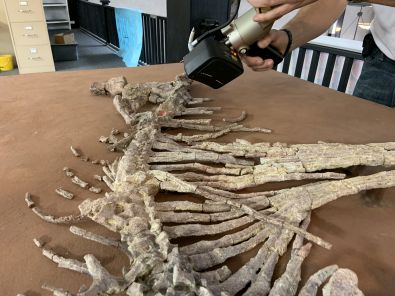 NVison's non-contact HandHeld scanner is ideal for capturing the geometry of fragile objects, such as the nearly 300-million-year-old Dimetrodon skeleton.

LuJan reached out to several scanning services before settling on NVision. All scanning was done onsite at the museum in order to minimize the potential for damage to the rare fossils. NVision technicians used the company's HandHeld laser scanner to collect data on all of the Dimetrodon's skeletal structures as well as the skull fossils.

The HandHeld scanner is a powerful portable scanning device capable of capturing 3D geometry from objects of almost any size or shape. The scanner is attached to a mechanical arm that moves about the object, allowing the user to capture data rapidly with a high degree of resolution and accuracy.

As the object is inspected, the scanner generates a point cloud consisting of millions of points, each with x,y,z coordinates and i,j,k vectors. These points comprise an exact duplicate of the object's surface, down to the most minute detail. The scanner comes with integrated software that is used to convert the point cloud to an STL polygon and an optional tripod provides complete portability in the field. Intuitive software allows real-time rendering, full model editing, polygon reduction, and data output to all standard 3D packages.

"There are lots of challenges when working with fossils, the first and foremost being that they are fragile and irreplaceable," says LuJan. "NVision's HandHeld scanner was a perfect fit for our static mounted skeleton. In the past we have used fixed base scanners where each individual piece of the skeleton must be separately placed on a scanning turntable and damage occurred in the process. This time ZERO damage occurred during the job." 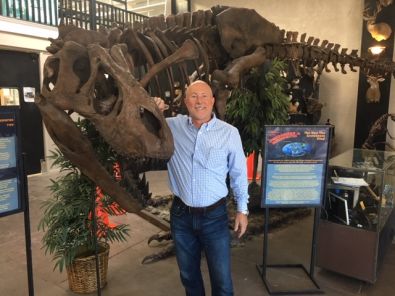 NVision president Steve Kersen stands beside a Tyrannosaurus rex skeleton, part of the temporary "Dinosaurs and Meteorites" exhibit at the Texas Through Time museum.

Scanning of the Dimetrodon and other Permian fossils was completed in two days, "much faster than we anticipated," says LuJan. "NVision's quick and professional service helped saved the museum significant time in preserving our paleontology specimens."

3D digital scanning is revolutionizing the preservation and study of paleontology specimens, making it possible to replicate priceless fossils, exact in every detail to the originals. LuJan is a strong advocate of its increased use in paleontology. "The data that NVision helped us collect from our specimens will be crucial in understanding Texas ancient history and past life. We anticipate many more benefits through using the data for scientific study as well as making affordable replicas available for display and education.

"Having partners in science like NVision helps make our small museum competitive and relevant in a changing world."