The engineering design and manufacturing company, Triton Space Technologies, is using 3D printing to produce prototypes for aerospace customers, and in the process, they are cutting costs, reducing material waste, and shortening turnaround times from days to hours. 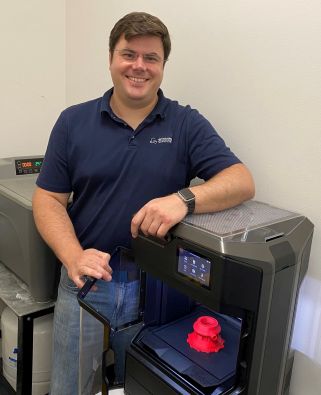 In addition to manufacturing its own line of high-pressure fluid system components and propulsion solutions, it provides contract engineering and prototype manufacturing services for customers requiring bespoke products, which it manufactures onsite in its state-of-the-art CNC machine shop.

"We have a customer going to the moon in 2021 who commissioned us to build some valves for them," said Luke Colby, President and CEO of Triton Space Technologies. "We wanted to create a functional prototype of the valve, to check that all the parts fitted together properly, and that the internal parts could slide and move as they should. We went into it not really expecting that the METHOD X (3D printer) would be able to keep the tolerances needed for the sliding parts to move, but it did."

VIDEO: With the METHOD X, Triton Space Technologies can deliver from concept to finished product in 30% to 40% less time and cost than traditional aerospace vendors.

Colby founded Triton Space Technologies in 2014, following 10 years as Lead Propulsion Engineer for Virgin Galactic's suborbital space tourism vehicle. Despite using large-scale industrial 3D printing machines throughout his career, it was not until the launch of the MakerBot METHOD X™ 3D printer that he considered the possibility that a desktop machine could be used to produce truly functional prototypes.

"The METHOD X 3D printer has evolved as a tool, providing us with a high level of reliability during part production. In our line of business, this is essential -- especially in comparison to other 3D printers where there's a risk that the final part will not come out as you'd expect. METHOD X mitigates risk by helping us to answer questions much earlier on in the design phase, so that's very valuable," said Colby.

Previously, Triton had to machine prototypes from sheet aluminum in its machine shop, a costly and inefficient process that took 2-3 days per prototype and created a lot of material waste. The alternative was to outsource to a 3D printing service bureau. However, this took even longer -- up to a week for each prototype -- and didn't always result in a usable part.

"We know what our design intent is, so when we print something, we know if the part is going to be useful. If we have to send it out to an external agency, the part might not necessarily be oriented in the direction that's most useful to us," said Colby. "Now, if a design doesn't come out quite right, or we want to make a change, we can do that ourselves very quickly. The reliability of the METHOD X means we can set a part to print overnight knowing it will be ready to use in the morning. Using the app, we can check on the progress of the print remotely. That is a really practical feature," he added. 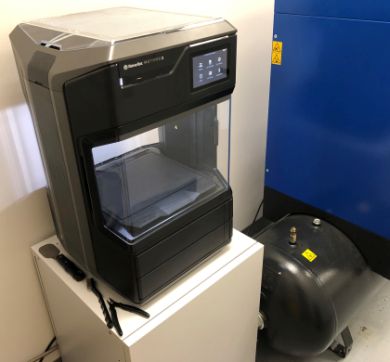 The MakerBot Method X 3D Printer can fit on a desktop.

The ability to print with Stratasys® SR-30 soluble support material is key to enabling Triton Space Technologies to produce functional prototypes with the tolerances required for the demanding aerospace industry. If produced without supports, or using snap-off supports, parts would have to be filed and sanded, greatly reducing their utility. Harnessing 3D printing's ability to produce complex geometries, with fewer individual parts, the company is able to create increasingly sophisticated prototypes capable of meeting the diverse needs of its customers.

"We also used the METHOD X to create a prototype of an injector head assembly for the manifold of a small rocket engine," explained Colby. "The idea was that it should have one common, sliding surface that would open up flow passages for both propellants at the same time. That would not have been possible with traditional manufacturing methods, as you end up with an assembly of many different parts coming together with a whole lot of seals in between them."

The option to print prototypes in durable real engineering-grade ABS is another benefit of using the METHOD X. However, Colby is excited about the possibilities offered by MakerBot's rapidly expanding materials portfolio, in particular MakerBot Nylon Carbon Fiber.

"The modularity of the METHOD extruders will enable us to continually expand and improve what we are able to do with different materials. That's really important to us, because most products become obsolete almost as soon as you buy them," concluded Colby.