"Previously, we would often lose a third of our shift's worth of parts, not to mention spending at least an hour sorting through parts to identify the scrap. Since using the MachineMetrics' predictive tool breakage technology, that waste has been eliminated. The savings at our Swiss turn machines has been monumental to say the least."

Founded in 2007, BC Machining specializes in manufacturing fabricated metal products. They offer aluminum machining services to clients in diverse industrial niches including healthcare, defense, transportation, and power tools manufacturing. BC Machining maintains contracts with medium-scale businesses as well as Fortune 500 enterprises for the production of a wide array of machined components.

An image of a "good" part (top) and a "bad part" (second from top). Below these are two endmills: the first is new, while the bottom is broken. For BC Machining, when the endmill breaks (like the bottom one), the slot does not get cut and the part becomes scrap.

On its shop floor, BC Machining makes use of computer numerical control (CNC) machines and digital technology. Located in North Carolina, the company plans to expand its operations by utilizing technology, such as data collection, machine learning, and edge computing, to optimize their use of any new equipment they purchase.

Recently, three employees at BC Machining sat down to discuss the decision to implement Machine Metrics Predictive software.

What is your role at BC Machining?

Tim: I'm Tim Merrill, I manage the shop floor, as well as the employees, and complete most of the setups out on the shop floor as well. 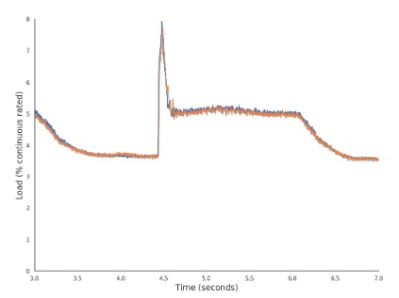 MachineMetrics' groundbreaking sensorless high-frequency data collection capabilities deliver unprecedented visibility and fidelity into the health and condition of the machine, enabling diagnoses and pattern recognitions that were once impossible.

Mike: I'm Mike Driskell. I'm the manufacturing engineer for BC machining, and I do all the CNC programming for our machines as well as keep up with tooling inventory to ensure information on the shop floor is correct.

Bob: I'm Bob Merrill, owner of BC Machining. We produce a range of metal parts for a variety of clients in healthcare, defense, transportation, and power tools manufacturing.

Why were you trying to prevent scrap parts and stoppages on your machines?

Tim: As a shop, every bit of scrap we produce is a detriment to us, so we are always looking to reduce our scrap rate. MachineMetrics helps us to track it. We can not only see that our scrap is being tracked, but we also have insight into which operator tracked it. With this data in hand, we know which operator is responsible for which scrap, so we can determine if we have a problem operator or we have a problem process.

Our Star machines, which are our Swiss turn machines, had a problem where they would break a tool and they would continue to run because they're an automated process. MachineMetrics was able to do a predictive tool breakage for us, which has eliminated all scrap coming off of the machine. Before, it would take the operator to walk over to it on his own accord and visually verify that the tool hadn't failed. Now, we're in a situation where 100% of the time the tool detection has caught the tool on its first failure.

Bob: In five minutes, we plugged everything in and we were able to communicate with the machine. Same with the tablets. They basically come ready -- you just plug it in, set up your wifi protocol, and it's all good. It was good to go right from the beginning. So very, very simple, very easy and very quick. 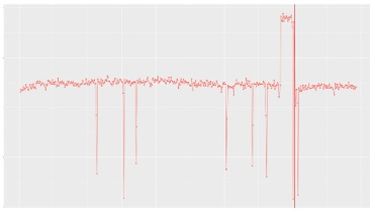 MachineMetrics was able to identify the signals on BC Machining's Star SR-20s before catastrophic tool failures occurred. Parts made during these elevated load periods were scrapped, costing BC Machining time and money.

Bob: Once the cable was into the Focas, we didn't have any problems at all. In terms of setting the control up, MachineMetrics sent directions on what we needed to change in the control in order to communicate with the Focas. And it went superb -- I mean, no problem at all, not one.

What has the shop been like after the initial installation of MachineMetrics? (the original deployment, not predictive)

What impact has MachineMetrics Predictive had on your day to day from both a cost savings and an operations perspective?

Tim: Since we've started using the predictive tool break technology, we have seen our scrap rate reduced considerably. Our operators don't have to go over and tend to the machine. They only need to go to the machine when we've had a downtime reason, which they'll see on our MachineMetrics screen or from the andon light at the machine. 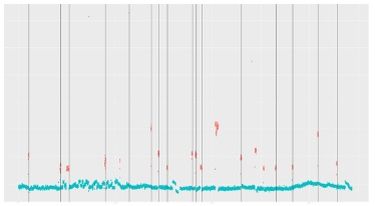 Over time, a predictable pattern emerged, indicating with 99% accuracy when a machine tool would be likely to fail.

It's made it so our operators can spend much more time at other machines, focusing on producing parts rather than checking on machines to see if they are producing defects. So, it's had a drastic impact on our shop floor and where our operators need to be and where their attention needs to be focused.

Mike: Before we were using the predictive tool technology, our operators would have to walk to the machine at least once an hour and make sure the [created parts] were good. In the past, when you'd have a broken tool, you'd walk over there and be annoyed because now you have to sort through all the parts to find the bad ones, and then you have to go into the machine and change the tool out and get it running again.

We even had some instances in the past where we'd have a breakage right after we put a new tool in. So, there's times where you'd have to change that out and do that whole process throughout an entire hour. Now that we're using the predictive tool breakage technology, you get a notification on the screens or at the machine or on your phone that says, "The end mill is broken." So, you go over there and you spend about five minutes replacing the end mill and the machine's back up and running. You might've lost a total of seven to ten minutes. And the operator's back at the other machine keeping production running. 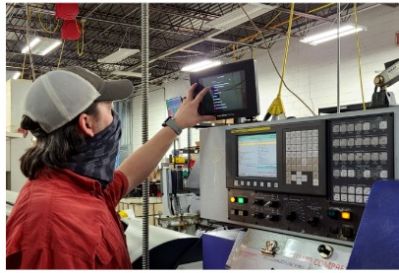 MachineMetrics Operator View tablets were installed at the machines as annotation tools for when issues occurred. Operators used these to identify that there was indeed a tool failure, enabling MachineMetrics Predictive software to match the data streams being received from the machines to what was actually happening.

Were there any unintended side effects as a result of installing MachineMetrics Predictive?

Tim: One of the unintended consequences that we've seen from using the predictive tool failure method is that before, when our tool would fail, it would continue to produce scrap parts and they'd be mixed in with our good parts. Since we batched them out several hundred at a time, we would have to manually go through all of those parts to identify the good parts from the bad. Now that we don't have bad parts being mixed in with our good parts, it has 100% eliminated our need to sort due to tool failures.

Regarding tool breakage, how much time was lost before MachineMetrics Predictive?

Tim: Previously, on a worst case scenario tool breakage, we would get two to three hours worth of the machine running while producing scrap parts. We also now have the opportunity to allow the machine to run when we leave. We run three shifts now, so we don't use that much, but [now we can leave] with confidence, knowing we're not going to continually produce bad parts. If we do start to produce bad parts, the machine is going to automatically stop.

What time savings has MachineMetrics Predictive created for BC Machining?

Mike: Since using the MachineMetrics' predictive tool breakage technology, our time savings at our Swiss turn machines has been monumental, to say the least. Previously, we would potentially lose a third of our shift's worth of parts, and then spend 30 minutes to an hour sorting through parts to identify the scrap. Now, we're not wasting any time sorting through parts to find a good or a bad part, and we're not losing any time when the machine is running and not making good parts. So, for the most part, when our machines are running, we're being profitable because we're not making bad parts.

How accurate is MachineMetrics Predictive in predicting tool failure?

Tim: I feel like it's near 100% of the time. During the testing period we worked out some of the false positives, but that's about it. These machines run in the background, and I don't want to say I ignore them, but I tend to ignore them unless there's an issue. I feel it works extremely, extremely well. I would put near a hundred percent number on that.