Did Cobots Help Manifold Manufacturer? How About Increased Profits and a 6 Month ROI

Since its inception in 1977, Tomenson Machine Works in Chicago has grown to become a world leader in the manufacturing of precision hydraulic manifolds. But the company was looking for a way to automate the tedious pin-stamping process. So, they turned to Universal Robots. The result? A 40% reduction in misloads, increased company profit margins and ROI within 6-7 months.

Tomenson Machine Works experienced some difficulty with employee satisfaction at its Chicago headquarters due to the repetitive nature of pin-stamping. It's not a task any of the 70 employees relished.

"Operating the engraver is tedious. It's not something people go by and say, 'Yay, Iâm going to go run the engraver for eight hours,'" explains Geoffrey Rose, secondary operations lead and quality supervisor at Tomenson.

The company decided to introduce automation to alleviate the problem, but since this was Tomenson's first experiment with robotics, it was important to find a system that was easy to deploy. 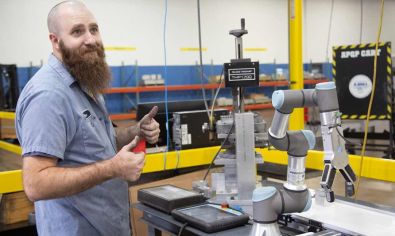 "No one in the company had ever dealt with collaborative robots or anything of this manner, especially not Geoffrey, who's doing the programming every day and running the system," says operations manager Alex Roake. "The first time he ever saw a collaborative robot was the first day we brought it in."

Tomenson puts dozens of different part sizes through its pin stamper, so the company also needed a flexible solution capable of handling part variance. Additionally, due to space constraints within the cell, Tomenson needed a solution that was both safe to operate around humans and would not require safety fencing.

For Tomenson, collaborative automation was by far the best option, offering a small footprint, easy implementation, and safe operation around human workers. 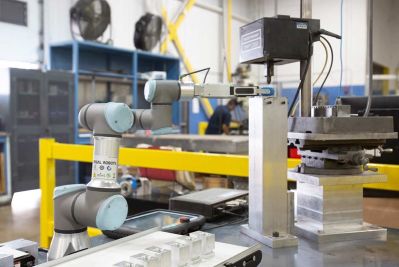 Tomenson chose to deploy Universal Robots' UR3 collaborative robot fitted with OnRobot's RG6 gripper, driven by the complete solution's ease of use, small form factor and built-in safety features. The RG6 gripper is part of the UR+ platform, which means it's certified to work seamlessly with UR cobots as the gripper's control software comes fully integrated on the cobot's teach pendant.

The process before automation involved a human operator loading the pin stamp machine one part at a time, standing or sitting at a stool and using a foot pedal to activate the pin stamp, all day long. The introduction of automation had an immediate effect on employee morale. 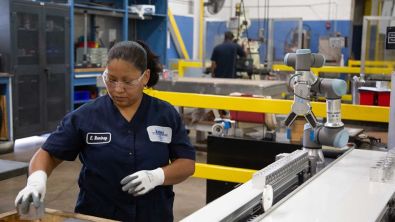 The UR3 requires no safety fencing, making it safe for close human-robot collaboration.

"When we first started installing the robot with the gripper, our previous pin stamp operator actually started cheering because she was so excited that we were able to move her to a different department where she could do more meaningful work," recalls Roake. "Now she's working in the shipping department and helping pack the parts and inspect the parts before they make it to the customer."

The pin stamping application requires the gripper to handle a great variety of different parts, but programming takes as little as five to 10 minutes since the robot can use the same basic code for every part and the gripper senses when it grasps the part, no matter what the part size is.

The company has seen significant benefits since deploying the UR3. 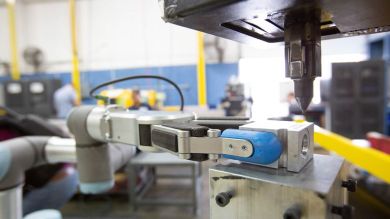 The cobot at Tomenson is equipped with OnRobot's RG6 gripper.

"Before this system and the gripper, we definitely had lower profit margins on these small parts," explains Roake. "Now when we see a small block, we're not afraid to quote it because we know handling thousands and thousands of these will be done by the robot, not a human, which makes us less fearful of quoting very high-volume small parts," he says adding that by easily automating the small parts with the gripper and robot, the company is able to save engineering hours while also reallocating workers to focus on bigger parts with complex processes and longer cycles that require more attention.

Ultimately, Tomenson expects a fast return on its investment by replacing a first-shift operator with the robot and gripper, estimating 13-month return on the system for a single shift. Roake adds, "If we're calculating the fact that we can now run the cobot on first and second shift, the number would be roughly half -- so in around six to seven months we will get our return on investment."

With the repetitive operation automated and staff moved to more valuable tasks, Tomenson also saw savings in where operators need to be deployed. 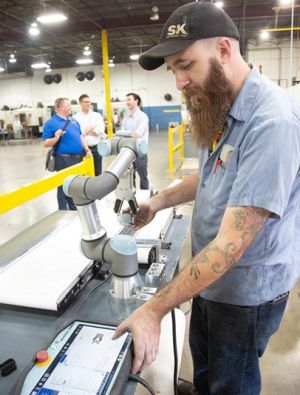 "Everybody has gotten along with the robot," said Quality Supervisor Geoffrey Rose. "It didn't take anybody's job."

"Now we load a conveyor that can run for around 45 minutes, and then just keep continuously loading and unloading the conveyor," describes Tomenson's operation manager. "Since we are able to let it run unattended for around 45 minutes, we're able to use the same person to run the line saw and the robot, as opposed to having two separate people. In terms of cost-saving, it's basically equivalent to one operator."

Having experienced the ease of use of the UR3, Tomenson is exploring other opportunities for collaborative automation.

"Now that we have a successful cobot application, we have looked into other possibilities in post-production or shipping or even loading up the CNC machines," he says. "The ease of programming is what leads us to be confident in this decision that we can carry over to other departments, because we don't need to hire an extra programmer, but can use our existing work force."

Indeed, some of the most useful ideas for potential future applications of cobot technology come from the shop floor. "We have several of our employees actively come up to us with ideas on where they would like to see a robotic system go in next," explains Roake. "Everyone's curiosity is at an all-time high."