CAD Design to Test Fire in a Week

Launcher's mission is to develop the worldâs most efficient rockets and transfer vehicles to deliver small satellites to orbit by combining liquid propulsion technology and onsite 3D manufacturing. In recent years, the company has turned to Velo3D to 3D print complex rocket components so they can complete that mission.

Humankind launched the first orbital satellite in October of 1957. Sixty-five years later, more than 5,000 satellites are in service, with roughly half of them placed into low earth orbit (LEO) over the past two years. Much but not all of this activity comes courtesy of entrepreneur Elon Musk, whose SpaceX-launched satellite internet constellation Starlink will soon account for at least half of the objects circling our planet. 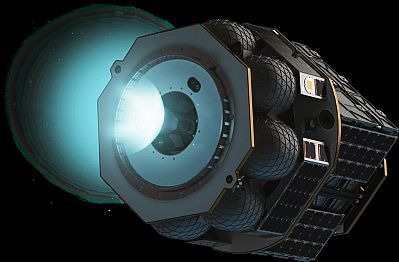 Launcher's Orbiter satellite transfer vehicle and platform, powered by 3D-printed engines, will first hitch a ride with SpaceX this fall; in 2024 the company's Launcher Light rocket will independently boost the Orbiter into space to launch satellites on its own.

"We donât think this rapid growth is an anomaly," said Max Haot, founder and CEO of Launcher Inc., an aerospace firm in Hawthorne, California. "We think it's the beginning of what's to come. In fact, we believe there will be hundreds of thousands of small satellites in orbit within the next decade."

Haot plans to be a big part of what he refers to as a small satellite revolution.

Later this year, Launcher will leverage the SpaceX SmallSat Rideshare Program to carry its Orbiter satellite transfer vehicle and platform into space, where it will deploy up to 400 kg worth of CubeSats and small satellites per mission and precisely place them into whatever orbit their owners desire.

And beginning in 2024, the company will start offering its own launch service -- Launcher Light -- a liquid-fueled rocket measuring 15.2 meters long and 1.1 in diameter that will carry 150 kg and 105 kg payloads into LEO and SSO (sun-synchronous orbit) respectively.

Orbiter is the top end of the rocket's three-stage design, Haot explained, and somewhat ironically, was supposed to be the last part of the vehicle to be developed. But when SpaceX announced in early 2020 that it would begin selling payload space on its Falcon 9 rocket, Haot and the Launcher team realized they could make their satellite deployment system compatible with it and other launch platforms and decided to fast track that part of the project.

"Seeing an opportunity to give our customers the best of both worlds, we brought Orbiter to the head of the line," he said. "At the same time, we continue our work on the Launcher Light's mechanical structures, the fairing, and, perhaps most importantly, the engine, all in preparation for its first commercial flight in 2024. So, it's been a very exciting year, with 80% of the organization's manufacturing capability focused on building our first Orbiter, which is flying in October of this year."

The goal of all this, of course, is to make satellite deployment both easier and more affordable.

Between the SpaceX RideShare program and Launcher's Orbiter transfer vehicle, the startup firm will soon be able to place payloads into customized orbits for a little more than $8,000 per kilogram. "These ride shares occur every three months, but if SpaceX's timing or trajectory does not meet our customers' requirements, we'll also have a premium launch service through our Launcher Light offering," said Haot. "Either way, these services come at a price tag that's unprecedented in the space industry." 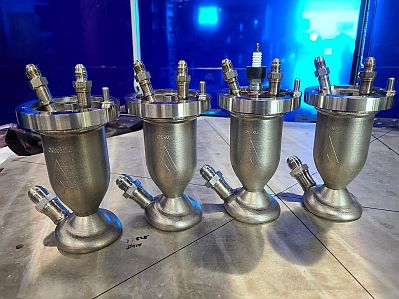 Haot and Launcher's head of manufacturing, Tim Berry, are quick to point out that none of this would have been possible without additively-manufactured metal components, the most challenging of which were produced on a Sapphire 3D printing system from Campbell, Calif.-based Velo3D.

"The Velo Sapphire with its ability to reliably print complex geometry made it very easy for us to pivot in the face of shifting priorities," said Berry. "That's a benefit of additive technology in general, but especially when you're using a highly-capable print platform."

He should know. Before joining Launcher, Berry worked at SpaceX for close to a decade. During this time, he led the Falcon 9's second stage integration team, followed by leadership roles on the Dragon's crew and cargo capsules before transitioning to head of additive manufacturing. Today he oversees Launcher's 24,000 sq. ft. factory floor and its team of machinists, welders, and technicians, as well as the company's small fleet of metal 3D printers, chief among them the Sapphire systems from Velo3D.

As noted earlier, Launcher began its most recent development efforts with the Orbiter rather than the rocket's main stage that would carry it into space. And since no rocket flies without a rocket engine, Launcher licensed the drawing for a space-proven turbopump, then set about improving its design using additive manufacturing (AM) technology.

Unfortunately, no metal AM equipment provider could produce many of the necessary components.

One notable example is the engine's shrouded impeller, an extremely critical and complex Inconel part that spins at 30,000 rpm, must withstand more than 300 bar of outlet pressure, and is filled with notoriously hard-to-print zero-degree angle surfaces. Said Berry, "The team at Velo3D took the challenge and we ended up with a finished part that exceeded all of our performance objectives. That was the beginning of our relationship."

That relationship continues to this day. Before investing in their own AM equipment and other metalworking machinery, Launcher subcontracted most of its parts to Velo3D's network of contract manufacturers. And while those companies did a good job, Haot knew that he would never reach his goal of fast, flexible, and above all, cost-competitive manufacturing unless Launcher became as vertically integrated as possible. 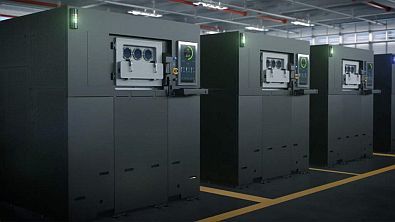 Velo3D's Sapphire family of printers all use the same software, run the same process, and use the same materials ensuring repeatable consistency across the fleet.

"As a modern space and rocket company, we have several important goals," he said. "The first and most obvious one is for Orbiter to deliver the lowest cost in the industry for the highest propulsive capability. But to achieve that, it's critical to have in-house design and manufacturing capabilities. Every time you buy a separation ring, propulsion system, or support structure from a third party, your costs and lead time easily rise by a factor of ten. So instead of the week or so it takes us to design an engine, print, and test it, we would spend maybe two or three months with an outside provider. It's prohibitive."

Berry pointed to the fuel tanks as one typical example.

"Shop around for a space-graded tank able to withstand 3,000 psi of pressure and you'll probably hear lead times of eight months to two years, especially if they're custom," he said. "That's not an option in our environment, so as with many of our components, we took the approach of designing based on our available tools." 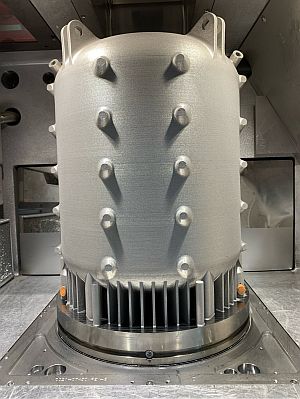 Launcher purchased a second Velo3D Sapphire metal AM system, this time dedicated to titanium, so it could manufacture a lighter-weight fuel tank than the original design that was 3D printed with Inconel. Shown is a just-completed titanium fuel tank in the build chamber of the new Sapphire.

As it so happens, the Orbiter's 22-liter tanks exactly match the Sapphire's build volume. Launcher began by printing the parts out of Inconel, and although they performed quite well, Berry and the team started looking for ways to optimize the design. Moving to lighter-weight titanium was the obvious choice.

"That's what brought us to our second machine from Velo3D," he explained. "It can print the exact same tank but with less weight and higher-pressure capabilities. We already thinned the walls a bit compared to the original design, but once we have the first few launches under our belt, we'll probably reduce them even further as we continue to push the envelope."

That's one of the biggest advantages of having in-house printing capabilities, he noted, as Launcher can continually push for more aggressive designs and higher performance without losing a lot of time or spending a lot of money. As such, the company is 3D printing a range of components on its Sapphire systems, among them brackets and other secondary structures, combustion chambers, and injectors.

"We don't have to completely change our design to make it work with the Velo3D printer," said Berry. "And in most cases, we can use whatever geometry we had planned. There's no need to make a bunch of compromises like there so often is with metal AM."

Haot addressed one of the criticisms that he and Berry had heard from others when shopping for a 3D printer. "Some people complain that the Velo system is closed in terms of materials and laser settings," he said. "For me, that's a positive rather than a negative." 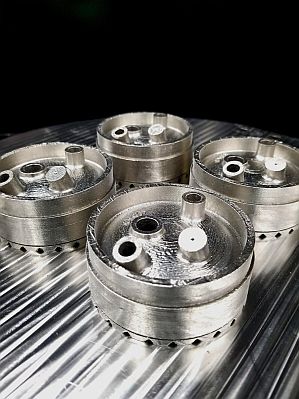 Berry agreed. "Yes, other 3D printers might let you play around more with the parameters and buy non-approved powder, but those activities take time and introduce uncertainty into the process. As an end-user, we don't want to develop parameters unless we have to, and we certainly don't need the hassle of material certification. Velo is practically a turnkey system. It allows you to focus on design iteration and spend more time optimizing for your specific use case, all of which supports our primary mission of low-cost satellite deployment."