The 2012 Numbers are in...and they are Impressive for U.S. Manufacturing

December U.S. manufacturing technology orders totaled $499.43 million according to AMT -- The Association For Manufacturing Technology. This total, as reported by companies participating in the USMTO program, was up 17.8% from November but down 9.4% when compared with the total of $550.99 million reported for December 2011. With a year-end total of $5,705.58 million, 2012 was up 2.6% compared with 2011. 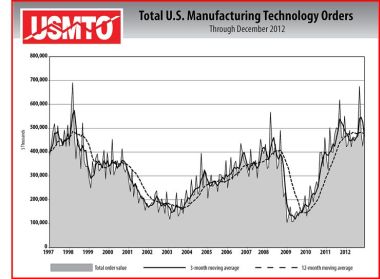 These numbers and all data in this report are based on the totals of actual data reported by companies participating in the USMTO program.

"Finishing 2012 with the highest order total in 13 years certainly confirms the renaissance of U.S. manufacturing," said Douglas K. Woods, AMT President. "This also shows the resilience of the industry in the face of GDP contraction in the fourth quarter, along with fiscal and political concerns that have been overshadowing much of the general economy."

U.S. manufacturing technology orders are also reported on a regional basis for five geographic breakdowns of the United States.