Machining hardened stock isn't for the faint of heart, but many alert shops have figured out how. In fact, some are running steels up to Rc 60 four or five times faster -- even in cavity work. Others have even found a way to mill the "hard stuff" on light duty machines using conventional end milling. 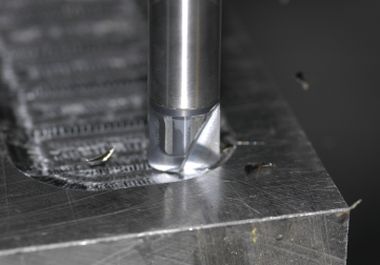 "Hard materials are less forgiving, so everything matters more when it comes to the milling process." So says Bill Fiorenza, product manager at Ingersoll Cutting Tools, who has helped hundreds of shops run hardened steels more efficiently. "Also, tool life is a bigger factor in overall process economics. Minimizing stoppage time for indexing can often save more machining money than ramping up the feed rate."

One impressive recent success is at Datum Industries, a die and mold shop in Grand Rapids, MI. Not surprisingly, a mainstay in their diet is cavity milling of hardened molds and mold blocks.

With a simple tooling change, Datum now roughs the blocks five times faster and has completely eliminated a semi finishing operation. Their previous standard tooling was a conventional 1/2 inch four-flute solid carbide ballmill. Now they do it with a two-flute indexable Ingersoll Chip-Surfer™ High Feed Mill with a bull nose tip. Settings follow the modern "feed fast/cut shallow" strategy -- 400 IPM/0.020"DOC/3855RPM. That's ten times faster feed than before. Stoppages due to tool wear are way down as well; just once every 15 hours, done in seconds, right in the spindle. On a material-removal basis that's a 25 to 1 saving in both downtime and tool inventory cost. 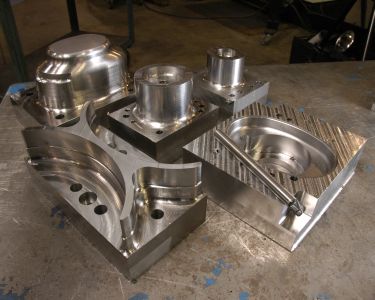 The Chip-Surfer tool itself is essentially an alloy steel shank that accommodates a variety of replaceable carbide tips. Datum chose the High Feed tip, which has two flutes and a bull nose cross section. The bull nose moves more of the tip's active cutting surface out near the pitch radius, so that more of the tool is moving at optimum cutting speed. Geometry on a spherical carbide ballmill, by contrast, means that optimum cutting speed can occur only at the midline.

More Secure Milling of A-2 Stock

At moldmaker B&J Specialties, Wawaka, IN, the key problem running hardened A-2 stock was tool failure of solid carbide ball with mills. Whenever time process engineer Scott Sizemore turned up the feed rate, the cutters either wore out or broke off within minutes. So he pretty much settled for a 100 IPM/0.004"DOC/3750 RPM machining rate. With the switch to an Ingersoll Chip-Surfer with a toroidal tip, he could double the feed rate and triple the depth of cut (DOC), leading to an overall threefold gain in cavity throughput. Despite the higher settings, edge life also tripled, with in-spindle tip changes taking only 20 seconds. Each tip consistently lasted a full hour. 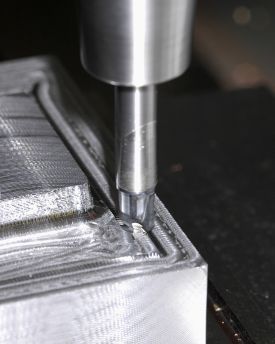 Toroidal-tip Chip-Surfer In the cut at B &J Specialties. In hardened A-2 die stock, the tool outpaces solid carbide ballmill by 3 to1 in cavity roughing and more than tripled tool life.

The toroidal tip features a robust sweeping radius to capitalize on chip thinning, with generous corner radii and back draft to clean out corners faster without overloading the tool.

"Cavity milling is essentially side milling with high lateral forces, which is where the ductile alloy shank comes in," adds Mr. Fiorenza. "It tolerates the flexure forces that can easily snap off a carbide shank -- especially on hardened stock."

15-5 ph steel hardened to Rc40 has grown in popularity among moldmakers because of the way it polishes. But at the cavity roughing stage, it's a bear, according to Minco Tool and Mold, Dayton, OH. Even at very low machining rates, it cratered the inserts on their standard four-flute zero-rake indexable cutter at unacceptable rates.

"We could live with the slowness, but not the tool failure rates or the mode of failure," says Minco procurement manager Glenn Mullins. "Early failure of one edge by predictable wear would still leave with us with up to three more useable edges, but sudden cratering ruins the entire insert." So Minco went the extra mile to optimize rough milling of the "bear". "It's the material of the future, so we need to do it well," says Mr. Mullins. Accordingly, he devised a test piece, brought in all of their mainstay tooling vendors to the same room and issued the identical challenge: here's the problem, give it your best shot. 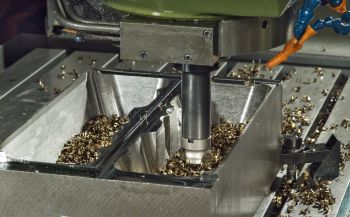 Minco Tool and Mold more than doubled cavity milling rate on increasingly popular but punishing 15-5 ph steel by switching to a Power-Feed+ facemill. Minco settled on it after exhaustive tests to optimize machining of a mold stock that was regarded as part of their future.

Two semifinalists finished the test piece in about half the time as before and much faster than the other competitors, with inserts lasting longer and wearing gradually. One was a five- flute cutter using four-sided inserts, the other an Ingersoll Power-Feed+™ three-flute mill with six sided inserts. The former was slightly faster, but the latter won out on grounds of overall economy. "Insert and indexing costs matter more in hard part milling, so we compared them carefully," said Mr. Mullins. "With fewer inserts in the cutter and more edges per insert, the Power-Feed+ would reduce our annual tooling costs by 70% compared with our original tool and 40% vs. the other finalist."

So now Minco mills its 15-5 ph twice as fast as before, at much lower tooling cost and with no catastrophic edge failure. As it turned out, tooling associated costs to mill the hardened material represented 35% of total machining cost. That's more than ten times higher than for milling softer stock. "This shows why tooling costs definitely merit more attention in hard part machining," said Ingersoll's Fiorenza. "Look for tools that both last longer and index faster."

Their solution was counterintuitive but successful: retool, but run faster. 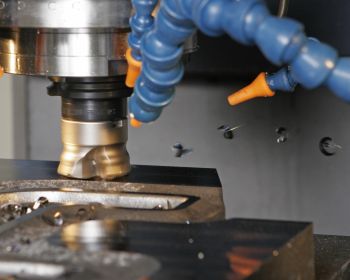 Their usual tooling for the hard-part duty was a 2 1/2 inch four flute cutter running at 50 IPM, 0.030"DOC @ 600 RPM -- deliberately slow to protect the spindle. Even at that low rate, the spindle load meter often approached the red zone. By switching to an Ingersoll Power-Feed+ face mill, they actually run faster while reducing spindle loads at least 15%. With the new tool, standard parameters for hard part milling are 100 IPM/0.020"DOC @1000RPM, leading to 10% faster material removal plus better protection for ceramic bearings. "Again, a free-cutting tool set for faster feeds and shallower cuts does the job," says Mr. Fiorenza. "The harder the material, the greater the benefit of this strategy -- both in efficiency and protection of the machine."

For end milling of hard stock, there's LT Enterprises, Fairfield, OH. One of their repeat jobs is an L-shaped military part made of 4140 steel hardened to Rc33. The part geometry made it difficult to clamp securely. Excess cutting forces cause certain sections to lift out of the fixture. Previously they handled the job with a zero rake solid carbide endmill. To prevent the liftoff, they ran it at a conservative 26IPM/0.250"DOC @525 RPM. Ingersoll recommended their then-new Evo-Tec™ facemill, which brings together all the latest insert advances into a single tool. As a result, LT runs the hardened part at 38IPM/0.400"DOC @ 525 RPM. Despite doubling the machining rate, edge life more than doubled as well. 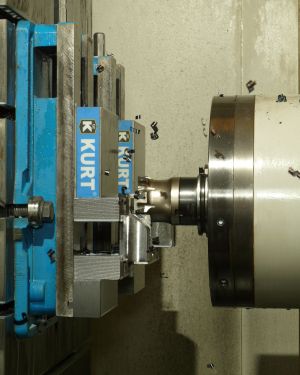 Based on success with that one hard part, LT has standardized on EVO TEC tools for all their milling, and expects to reduce annual tooling costs for this operation by more than 40%.

The Evo-Tec milling cutter is the first tool in the US to incorporate tangential insert orientation, thicker inserts, a helical cutting edge and a very secure insert pocket. The tangential orientation and thicker cross section withstand higher cutting forces. The helical edge reduces those forces by creating more of a shearing action like scissors cutting paper. The tighter insert seat minimizes chatter, a risk that increases with material hardness. Result is a stronger, gentler-cutting tool that stays put.

Not So Hard After All

"Everything that matters in milling matters more in hard-part milling," concludes Mr. Fiorenza.