At its general industry job shop in Odessa, Florida, Alan Manufacturing Inc. has been serving a variety of local manufacturers with quality components since this production CNC turning shop opened in 1976. These components include parts used in the production of high-accuracy flow instruments, high-pressure hydraulic gear, surgical equipment, marine engines and military ordnance. 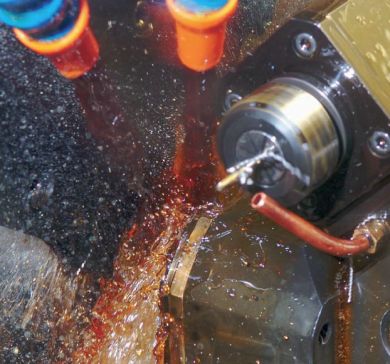 The operators at Alan Manufacturing have figured out how to achieve nearly 100 percent uptime.

While this might seem like any normal shop, what's unique here is that the two operators, Al Feldman and Geoff Giner, both trained in G-code programming basics, are consistently achieving nearly 100 percent machine utilization, with the exceptions of cycle, workpiece and insert changes.

"We've targeted a customer product range and a production strategy that allow us to utilize the machine tools we have in-house in the most efficient manner," says Al Feldman "For example, we can use a 1/16 groove tool for almost every job, performing single or multiple cuts. The set-ups are a lot easier and with a fresh insert each time, we're ready to go." 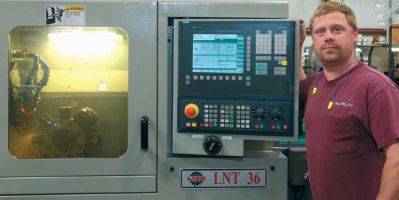 At Alan Manufacturing, the machine tools currently in use include a Landis grinder, Sunnen honing machine, Hardinge machining center for hard machining, plus the main workhorses, as Feldman calls them, an Emco Maier 332MC turning center and the newest acquisition, a Lico LNT 36 turning center with three independent slides, separate from the turret, with a back spindle, so up to four live tools can be utilized simultaneously.

The Lico machine runs its main and back spindles simultaneously, with full OD/ID machining and an 8-position toolchanger. Both the Emco Maier and Lico machines have Siemens SINUMERIK 840D CNCs onboard, which, according to Feldman, is a key factor for the shop's efficiency.

"We bought the Emco machine several years ago and the Lico machine in 2006. Our first impression, lacking statistical data, was that the Siemens-controlled equipment seemed to run continually. Now, with over three years of production data to document the facts, I can say without reservation that our net production rates are approaching 100 percent on most jobs, stopping only to change inserts." 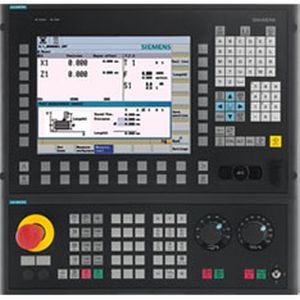 He adds that set-up data is easily captured for each job, as the data are downloaded via RS232 serial communication from the machine controls to the host computer for statistical analysis. "Further, with the large storage capacity on the CNC, all the jobs run can be stored for immediate recall, though each program is also backed up offline on the company's computers."

When programming a job, Feldman observes, "It's a piece of cake. We can do it directly on the machine, using a customer-supplied print or DXF file. The control has straight- forward capabilities for cut, copy and paste. Plus, there are many helpful sub-routines and self-help graphics for threading, turning, boring and grooving. Almost every aspect of the cycle is accomplished on the machine control while the previous job is still running."

The shop has been able to duplicate programs between the Emco Maier and Lico machines, so that it can run up to 75 percent of its jobs on either machine. The multi-channel controls are the same, as are the motors and drive packages. On the Lico machine, a custom, but transparent, front end to the Siemens CNC was developed by the machine builder. Feldman credits Jimmy Cheng, a Lico engineer from the factory in Taiwan, for getting the machine into action quickly at Alan Manufacturing. Working with its local dealer, this Lico engineer spent four days at the shop, helping the operators learn the system specifics. 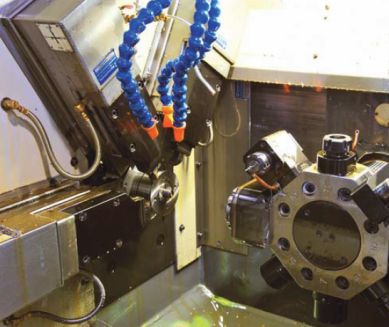 The Lico turning center has three independent slides, separate from the turret, with a back spindle and can run up to four live tools.

Additionally, Feldman notes that both the machine builders and Siemens have been very responsive on service, whether the issue involves machine maintenance or programming issues. "With Siemens, our CNC supplier, the ball starts rolling within minutes after any call or e-mail to the support center," Feldman says. "Without fail, they stay with us until the issue is resolved and we're satisfied."

According to Feldman, the near 100 percent machine efficiency, coupled with the large number of jobs stored on the machining centers and diversity of customers currently served, makes the future outlook for Alan Manufacturing as secure as is possible in the present market conditions.