"Our defined cost of quality, our scrap rate, and our on-time delivery percentage have all shown marked improvement since we acquired our FaroArm," says Gary Osborne, Buyken Metal Products' Quality Assurance Manager.

Buyken Metal Products of Kent, Washington is one of the strongest and most respected manufacturers of quality metal parts products in the northwest. Known for producing high quality sheet metal products, Buyken's success is a result of its commitment to innovation and their investment in equipment. In fact, Buyken has a long history of investing in the latest equipment, technology, and training so the company can stay at the forefront of all aspects of metal parts manufacturing. 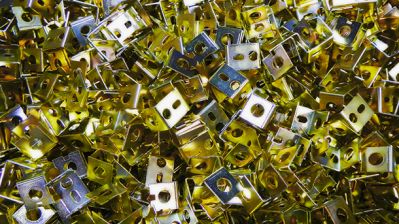 Buyken was founded in 1939 and for over 70 years has been a leader in precision sheet metal forming, stamping, and fabrication. The metal products industry has changed over this long history to where lead times are getting shorter while customer demands are growing. And still, price gets the business. Buyken's competitive advantage comes from dissecting their processes to search for the best way to build parts. The company's commitment to the highest standard of capital equipment allows them to respond to ever-changing customer needs and helps ensure Buyken's position as an industry leader.

Buyken measures everything from electrical transmission parts that can be as long as 25 feet and have bolt patterns with tolerances of ± 0.032 inches to small, one inch diameter washers with tolerances of 0.003 inches. These parts are in runs of one or two pieces up to two million pieces.

The FaroArm made it possible for Buyken to complete measurements with one set-up and has dramatically improved efficiencies.

To measure these parts, Buyken used surface plates, height gauges, calipers, micrometers, pin gauges, and various other monitoring and measurement equipment. These measurement methods were slow and often required several set-ups for complex parts, especially for parts with compound angles or several bends. Not only were these methods slow, but they did not provide automatic recording, requiring manual recording of measurement data and then determination of out-of-tolerance deviations. This took a lot of time and was subject to recording errors.

Buyken looked into optical measuring systems, but the z-axis limitations and the table size that would be required to overcome them made such a system untenable.

In looking at portable CMMs, or measurement arms, Buyken set up a competitive shootout of sorts. They had two articulating arm competitors come in and gave them a very difficult part. This part took Buyken's best technician four to five hours to complete using existing monitoring and measurement equipment. Both competitors were given the part with the dimensioned drawing and very minimal instruction. The goal was to create a completed first article inspection report for that part. 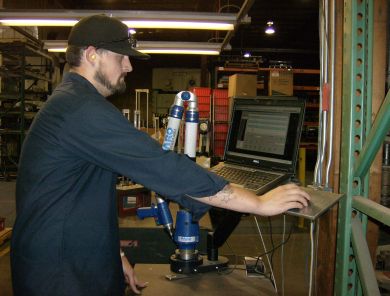 In addition to consistency, Buyken has even gained additional work because they implemented a FARO system.

"As it turned out, there really was no competition at all," said Gary Osborne, Buyken's Quality Assurance Manager. "FARO won hands down."

Buyken bought a 6-foot FaroArm® with FARO's CAM2® software. The FaroArm made it possible to complete measurements with one set-up and has dramatically improved efficiencies. Instead of taking parts to a surface plate, Buyken now takes the FaroArm directly to the part needing measurement. What's more, the FaroArm provides the reporting and editing capabilities required in today's modern era.

As part of their implementation, Buyken attended FARO University. "FARO's training was a very pleasant surprise in that the instructor's ability to impart his knowledge to the students was remarkable," said Mr. Osborne. "It made our transition and implementation very easy." 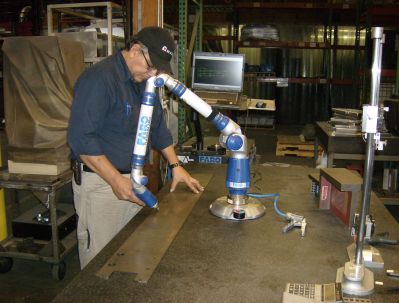 Instead of taking parts to a surface plate, Buyken now takes the FaroArm directly to the part needing measurement.

For Buyken, the flexibility of the entire system has been key. The company has found the CAM2 software to be especially intuitive. "There's no need for a 'FARO for Dummies' book," said Mr. Osborne. "The report quickly generated by the system matched the mapped drawing with feature locations and dimensions."

The time it takes Buyken to generate first article inspection or PPAP (Production Part Approval Process) reports has been reduced one to three hours per instance by implementing a FARO system. "Not only has FARO saved us time," said Mr. Osborne, "but it has reduced the variations in measurement from day to day, part to part, and operator to operator. FARO demands consistency." 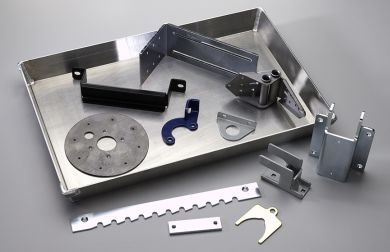 In addition to consistency, Buyken has even gained additional work because they implemented a FARO system. A customer came to them with a DoD part they wanted the company to manufacture. Buyken was awarded the contract because they had a FaroArm with the capability to measure the 13-foot long part with a very tight tolerance. Other customers have also asked for support in reverse engineering their own parts that lack existing drawings or with performing measurements that are beyond their capabilities, but not those of Buyken and the FaroArm.

"For Buyken Metal, it's difficult to put a dollar amount on our savings by implementing FARO," said Mr. Osborne. "Our defined cost of quality, our scrap rate, and our on-time delivery percentage have all shown marked improvement since we acquired our FaroArm. I am sure FARO has made a significant contribution to the savings we realize with the speed, consistency, and accuracy of the system."