Concerns about dermatology in a machine shop? This sounds more like discussing ballet on the baseball field. Dermatitis is not a general complaint among grinder operators, but finding a solution to the problem was almost as tricky as finding a prima ballerina who can pitch for the majors.

Mark Greene, safety/EPA director of United Foundries, Inc., in Canton, Ohio, was facing an unusual dilemma. "Most people might not think my job is creative," said Greene, "But when you've got 3 of 11 grinder operators with dermatitis ranging from moderate to severe out of a pool of 200 employees, and it's affecting their ability to work, you've got to do some out-of-the-box thinking to remedy the situation." 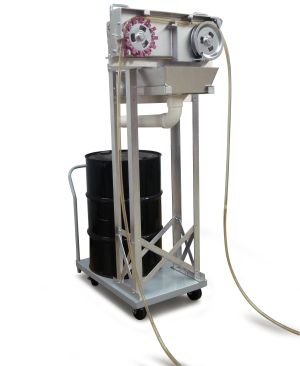 United Foundries, Inc. was established in the early 1900s. The company has three locations, one of them in South Africa and the other two in Ohio. The Canton foundry's machine shop grinds mostly cast-iron molds for rolling steel and other materials.

The grinding operators use water as a coolant during the grinding process. This water process has been used for nearly a century -- as long as United Foundries has been operating. But even at the onset of the problem, Greene knew it was bacteria-rich grinder water causing the dermatitis outbreak. To curb bacteria growth, United Foundries consistently replaces coolant water on an 8-to-10-week cycle. Using this system, the bacterial growth rate starts off slowly in the first two weeks and requires only small amounts of biocide to control it. Further into the cycle, the growth rate of the bacteria increases, requiring more and more biocide.

Amid the effort to stem the dermatitis problem, the manufacturer of the biocide United Foundries was using stopped producing the product. Greene used an alternative biocide with similar results, but the root cause of the dermatitis was still a mystery.

Finally, however, he discovered the source of the bacteria causing the dermatitis. Grinders leaking oil during the grinding process were the gnawing bacteria's food source, and the bacterial growth rate increased as the food source -- the oil -- increased. The smallest cut or abrasion on the hand or arm of a grinding operator exposed to the contaminated oil/water mix became the perfect route for bacteria to enter and cause dermatitis.

"We were adding more and more biocides, but the dermatitis problem was not going away," said Greene. To further complicate matters, the issue of carcinogens was raised. "The operators became concerned that a new biocide we started using might contain carcinogens. My operators were alarmed. I knew I had to do something fast. Biocides weren't the answer in this case. I needed something that would allow the operators to continue using the water process, pose no harmful side effects, and keep bacteria growth at a minimum -- right now!" 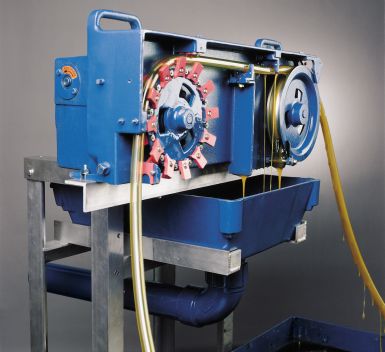 While wrestling with the problem, Greene came across some information about an oil skimmer manufactured by a Cleveland, Ohio, firm. He spoke with a representative from the company, and together they decided he could purchase an oil skimmer, devise a method for removing the oil from the water that runs into the sumps under the floor, collect the contaminated oil, and test the remaining water for bacteria. Oil skimmers are traditionally used to remove oil from water in order to clean the water for re- entry into regional sewer systems or to return the oil-free water to the ground. Because the oil in the water was the dermatitis culprit, Green decided an oil skimmer would solve his problem. He would be proved right.

Greene purchased one oil skimmer to serve four grinders in the foundry's machine shop. The oil skimmer, installed on a portable cart, alternates among the four grinders in the machine shop to collect the oil, and it's run two times a week for 60 to 90 minutes at each machine. The coolant water is replaced every 8 to 10 weeks. The used oil is placed in barrels along with other used oil, then picked up by a local recycling company.

Easily modified to specifications for usage below ground at the machine shop, the skimmer includes a 26-foot-long specially formulated polyurethane collector tube that draws the oil into the area surrounding the closed-loop tube and off the surface of the water. Oil adheres to the outside of the tube and is drawn through scrapers, removing the oil. The recovered oil collects in an oil recycling drum. The clean tube is returned to the water to collect more oil. The model Greene purchased is capable of running 24 hours a day with little or no supervision. The polyurethane tube can be sized to specification, can withstand temperatures up to 200 degrees F, and will not fracture in freezing conditions. The system can remove as much as 100 gallons of oil per hour.

According to Greene, the workers are so happy with the oil skimmer that when it is moved from their location, they want assurance it will be back. "They believe in it," he said. The dermatitis problem is no longer an issue at United Foundries, and no biocides are presently in use.

The oil skimmer has taken its place, to the satisfaction of Jack Dedmon, who had the most severe case of dermatitis. Dedmon has been an operations table grinder at United Foundries since 1961. In 1979, a scratch on his finger became infected, and severe dermatitis followed. The dermatitis on his hands and arms was so bad that he was in the doctor's office at least once a month. When he was most severely infected, Dedmon was unable to operate the table grinder. Worker's compensation helped pay the bills and compensate for his inability to work at his customary job.

"The dermatitis cleared up almost immediately after we installed the oil skimmer," said Dedmon. "I rarely see the doctor for my dermatitis now; maybe once a year. When I have a mild flare-up, I put on some salve and it's fine, and I am back at my old job full-time as an operations table grinder. Since we installed the oil skimmer, we've probably saved United Foundries plenty in worker's comp. The most important thing, though, is that it looks like we finally cleared up the bacteria growth problem."

Greene feels good about his creative solution to a nagging problem. The biocide wasn't helping clear up the rapid growth of bacteria, and some workers were concerned about the side effects of biocides. Additionally, Greene has found that the oil skimmer has paid for itself in lowered worker's compensation costs for the company.

"I've seen how quick and efficient our oil skimmer is," said Greene. "One day, using the oil skimmer for a project separate from the grinder sumps, we hooked the oil skimmer up with a 55- gallon drum to collect used oil in a different area of the shop. We broke for lunch. When we returned 40 minutes later, the drum had overfilled and used oil was spilling onto the floor. That's more than 55 gallons in 40 minutes. We washed the oil overflow back into the below-ground pit, attached a new oil-collecting drum, and in 10 minutes the oil skimmer picked up the oil that had initially overflowed."

The oil United Foundries uses is very thick. The more viscous the oil, the more quickly the oil skimmer picks it up. For example, diesel oil or #2 fuel oil collects at 10 to 20 gallons per hour. Hydraulic oil collects at 20 to 30 gph, and gear lubricants and heavy fuel oil collect at 60 to 75 gph. "The most important issue," said Greene, "is that we found the problem and we conquered it. Some may call it a creative process in problem-solving. I'd say it's the way you've got to do business today. And the solution to the problem has left us all with a good feeling of accomplishment." Perhaps something akin to a major league home run.