Motivation, Innovation, and Modernization Enables Employee-Owned Job Shop to Save Time and Money While Doubling in Size Every 3 Years

At Suburban Manufacturing, employees are given the chance to innovate and redesign processes. That policy, along with a switch to Okuma's horizontal machining centers, has allowed this "true job shop" to better compete for business.

Suburban Manufacturing has been in business more than 33 years and has a gleaming, state-of-the-art 30,000 square foot CNC machine shop. Their 65 employees -- many of them tenured machinists -- are innovative, creative and motivated. At Suburban, the employees are given fertile ground to think, innovate, and redesign processes, fixturing, tooling, setups and much more. According to President and company founder Rick Grice, the essential ingredients in keeping Suburban successful and competitive are their innovative people and the fact that the company is employee-owned. 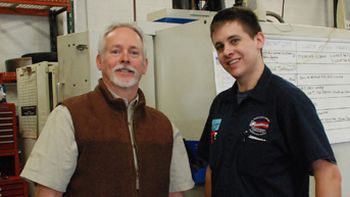 Employees, including General Manager Ron Jech, Operations Manager Rick Mulligan, Quality Manager Jerry Hirter and Vice President Brian Nuibe note that as a group, the company is especially proud of the number of years they have served their customers and the fact that they have been recognized as one of the fastest growing companies in their region. They're quickly moving up the ranks in the prestigious Weatherhead 100, an index of Northeast Ohio's fastest growing companies. In 2011, they ranked 69th; in 2012, they moved up to 41st. Suburban is one of very few manufacturing companies on this elite list. And they expect to continue their growth trajectory. They are already ISO certified and achieved their AS 9100 certification in early 2013. This will help them compete for business and supply OEMs in the aerospace industry.

Covers going over the PALLETACE system

Suburban has been employee-owned for nearly ten years. While this may seem like an insignificant fact, it holds tremendous value for their customers. It means the same people who are handling customers' tough jobs are owners of the company, and their reputations, careers and aspirations are on the line too. It's the ultimate motivation to do their very best on every job.

Nuibe likes to say that Suburban is a "true job shop". "We have vertical machining centers and horizontal machining centers, single- and multi-spindle CNC lathe machines, saws, hones, sand blasting, part marking -- a huge array of operations," he says. "We run all grades of aluminum, stainless, brass, hastaloy, Inconnel, and titanium. We run bar, plate, castings, forgings and extrusions. We tackle a mixture of prismatic and cylindrical parts. We do everything from prototyping to production and everything in between." 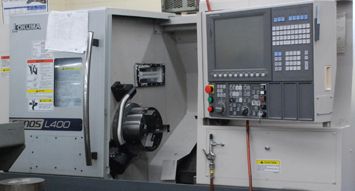 A GENOS L400 horizontal lathe in the Suburban Manufacturing shop

Reasons for selecting Okuma over other brands included Okuma's solid reputation, the fact that the company has a long history (since 1898), Okuma's distributor, Gosiger Cleveland, was well known for its solid service and support, plus Suburban had previous experience with Okuma. "We have an Okuma MC 50 horizontal machining center with a 50-tool ATC, CAT 50 taper tooling, 50 hp motor and multiple pallets," Grice says. "We call it the Green Monster. This CNC machine is over 25 years old, and it's still running today, holding great tolerances and can still really take a cut."

Gosiger's service has been an important part of the process of bringing in the new machines, according to Grice. "The Gosiger training is great. They go to great lengths to fully understand the CNC machines, and to make sure we do too."

When the original Okuma MA-500 arrived, it was shortly followed by a Fastems pallet storage/management system. Once the two were tied together, four 20x20"pallets from the older MC-50 were moved over to the MA-500. Just by moving from the old to the new, cycle time was cut by 20 min and this without making any other changes. The difference was speed. The MA-500 has a rapid traverse of 2,362 ipm with a 0.7 G acc/dec -- far faster than Suburban's other horizontal machining centers. "What we're doing is taking very tall tombstone fixtures and loading them up with parts. The tombstones are eight-sided and stacked two high, one atop the other. This way we can get as many parts as possible on the table at one time," Nuibe says.

Nuibe says that Suburban is leaning more and more on horizontal machining centers because with the pallet changer one can almost eliminate idle spindle time. The spindle is turning even during pallet changes. "We put a fixture in, and we do all the loading and unloading outside the machine, while the machine is running," he says. "Further we're trying to combine operations at every turn. With the vertical machining centers and lathe machines, we may have to do three to four setups. With the horizontal machining center, we do a single setup, saving all that setup time."

Through the frame of the new PALLETACE, you can see the original Fastems FMS and 2 Okuma MA-500H horizontal machining centers.

Not only is time saved in single setups, but costly setup "variables" are eliminated as well. Every time an operator touches a part, fixturing and refixturing the setup, this introduces the possibility (and likelihood) of process variability, which may result in out-of-spec parts requiring time-consuming rework and/or scrap. The fewer variables in the process, the greater the odds of first part/good part.

Productivity and Parts Out the Door

"These CNC machines are very productive, and we're getting outstanding uptime," Nuibe continues. "They've conquered everything we've put on the table. Our impression of Okuma at the time of purchase was very good, and that hasn't changed a bit. These are the perfect CNC machines for what we want to do now and what we're planning for in the future. Customers come through here and stop dead in their tracks when they see the horizontal machining centers and FMS systems. They're just wowed." 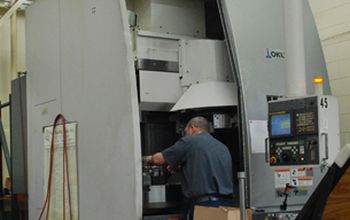 The ultimate goal, according to Grice, was to replace some of Suburban's older equipment, machines just not holding repeatable tolerances. They are retiring some of their vertical machining centers. "Each of those machines requires a dedicated operator, and if we just move the work over to the horizontals, it frees up people to work in other parts of the shop and opens up valuable real estate. This is a gradual process, but Okuma is helping speed the process up."

Growing Their Own and Going Beyond

Rick Grice started his own career as an apprentice with GE, so he understands the value of hands-on learning with incentives tied to performance. Given that the company is doubling in size every three years, it's important to "grow their own" next generation of employee-owners. Suburban partners with nearby Lakeland Community College to rigorously screen, recruit and train qualified candidates, all of whom are thrilled with the prospect of becoming a true "machinist", not just someone running a machine.

The goal is to foster excellence and expertise in their next generation of machinists, so they're ready to impress the next generation of customers with challenges to overcome. Suburban's Okumas are the right machine tools to help them go beyond and achieve everything their customers expect, and more.