To stay competitive, RSS Manufacturing & Phylrich needed an inexpensive automation solution that could easily be moved between CNC machines, assembly lines and tube benders. The company deployed a UR5 from Universal Robots and was quickly impressed with the robot arm's performance and ease of use.

Before the faucet maker RSS Manufacturing & Phylrich put the UR5 robot to work, bending 1500 units on a tube bender using manual labor would take 3 days. With the Universal Robot, the same job took four hours. 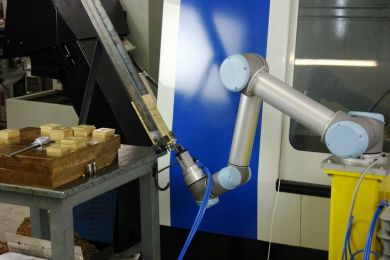 RSS Manufacturing & Phylrich manufactures plumbing fixtures and fittings for faucets. It is a highly specialized short run production facility with turnaround time as quick as 24 hours. CEO Geoff Escalette explains that his company deployed a UR5 robot arm from Universal Robots as the company needed an inexpensive automation solution that could easily be moved between CNC machines, assembly lines and tube benders.

"We were quickly impressed with the UR5's performance and ease of use," says Escalette. "In a flexible environment like ours, you need a flexible robot. One that can work without safety cages, is portable, and can be reprogrammed quickly." 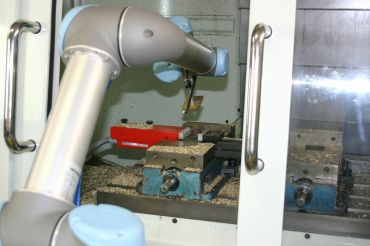 RSS Manufacturing & Phylrich found the UR5 to fulfill the need. The robot arm has also been integrated in the milling cycle with a Hurco CNC machine after a monthly order for 700 valves came in.

"Our CNC machine normally produces 400 valves per month with two shifts, so we would have been forced to buy another machine even if we put a third shift on. With the higher run-rate using the UR5, none of this was necessary," says Escalette.

The California company put the UR-robot to work 24/7 and met the order in 11 days while opening up 30 percent more capacity on existing machinery.

In this particular case, Escalette estimates the ROI of the UR5 to be a couple of months. At its current configuration being moved to various machines, the ROI is estimated at 6 months.

Total setup time including all programming and tooling took eight hours. Moving the robot from one application to the next now takes about 30 minutes. The external cost of integrating the robot in production was minimal as the company's safety assessment deemed the collaborative robot able to operate without guarding.

"I've worked with other robotic models in the past. It's one thing to say it's easy to program a robot, another is to integrate it into a real application," says Automation and Integration Specialist with RSS Manufacturing & Phylrich, Shane Strange. "But with the UR-robot it really was easy. If you can write a to-do list, you can program this robot." 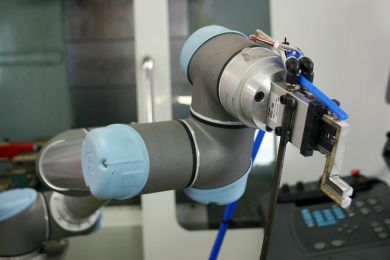 From a programming stand point, the tablet interface is one of the most significant benefits of the UR-robot:

"You're right there with the robot, troubleshooting as you go. It saves a lot of time when you don't have to go back to the office, run simulations, go back out on the floor, boot it up, and watch in real time what it's going to look like," says Strange, who now performs all these actions directly from the handheld touch screen that comes with the UR robot.

The next job the UR5 will perform at RSS Manufacturing is a buffing and polishing assignment.

"What also got us excited about the UR robots is their ability to exert a certain amount of pressure through the advanced force control feature," says CEO Geoff Escalette. "It's very hard to find employees that can manually polish brass fittings applying the right amount of pressure. Now we can use the robot for this task." 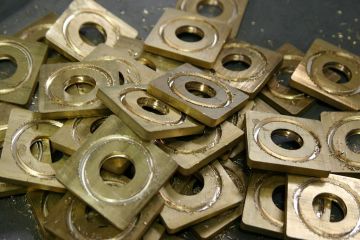 RSS & Phylrich is expecting a 200% company growth rate next year.

"The whole premise of our company is to stay competitive and bring manufacturing back to the U.S. The UR5 robot fits perfectly within that master plan," says Escalette.

"We're receiving many inbound calls about Universal Robots right now. My biggest challenge at the moment is getting the robot in front of as many people as possible in the shortest amount of time."

Watch Video of UR5 in Action