Machining high-strength materials can be a slow, laborious, and cost-intensive experience. In general, solid carbide tooling commonly runs at speeds between 65 and 200 SFM (20 to 60 m/min) in such materials with limited tool life. New Beyond KYS40™-grade solid ceramic endmills from Kennametal, however, are presenting orders-of-magnitude improvements in machining high-strength nickel-based alloys, roughing at cutting speeds up to 3,300 SFM (1000 m/min) with tool life two to three times longer than comparable solid-carbide tools.

Ceramic indexable inserts have their place today because they can operate at higher speeds in selected applications, but solid ceramic end mills were rarely seen because such tools were more brittle than carbide and did not perform well. In fact, many turbine manufacturers have taken to producing their own solid carbide end mills in-house due to the high consumption of these tools. 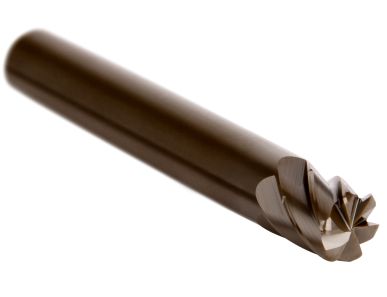 The wear mechanisms and wear indication on the solid ceramic end mills is completely different from carbide, allowing running ceramic end mills far beyond the point where carbide tooling would need to be replaced. That's also the reason that this new KYS40 grade end mill is a throw-away type of tooling to allow usage beyond regular type of wear.

The KYS40 Beyond grade ceramic in both the four-flute and six-flute versions features an enlarged core design that improves tool rigidity and reduces deflection at high cutting speeds. Optimized end geometry and a 40-degree helix angle increase shearing action and chip evacuation.

The six-flute EADE solid ceramic end mill was tested profiling a blisk (blade integrated disk) made of Inconel 718 and run with compressed air for chip evacuation. Unlike conventional carbide tooling, roughing to near net shape creates chips closer to dust than traditional curled chips, requiring only compressed air to blow them out of the cut. Test conditions were cutting speed of 679 m/min (2228 SFM), feed of 0.03 mm/z (0.0012 IPT), and the depth of cut varied up to 0.5 mm (0.0197 inches).

The results were two blisk segments machined with one tool at a 12-minute machining time per segment, which test personnel deemed "unprecedented."