Supersonic Car Relies On CNC Software to Help Its Bid to Travel 1,000 mph

An essential part of the assembly holding the rocket motor in place when the Bloodhound supersonic car travels at over 1,000 mph during its bid to break the World Land Speed Record in 2016, has been made using Edgecam CNC software.

The Bloodhound Project is led by Richard Noble, who took the record in 1983 with Thrust 2. As well as breaking the existing record and topping 1,000 mph, Bloodhound also aims to excite young people about manufacturing and engineering. The car is a mix of automotive and aircraft technology, powered by the engine used in the Eurofighter Typhoon aircraft, along with a hybrid rocket. 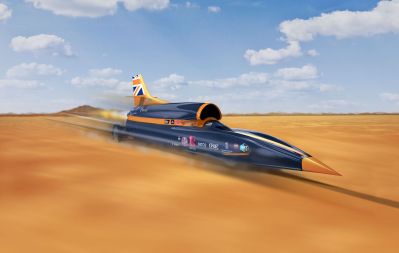 The Bloodhound car is being built to try and break the world land speed record in 2016.

The body and chassis are relying on a range of advanced design and manufacturing techniques, including a specific production engineering solution with Edgecam that prevented distortion of the rear subframe side wall structural panels. The 1.6m x 1m panels were produced by the Nuclear AMRC on its Starragheckert HEC 1800 large format horizontal boring machine. They have to mate up with other parts in the rear assembly which are vital in keeping the rocket pointing perfectly backwards and providing downward thrust when RAF fighter pilot Andrew Green drives into the history books in South Africa in 2015 and 2016.

"The accuracy of Edgecam's toolpaths was vital in allowing us to achieve the extremely tight tolerances required," says Andrew Wright, production engineer at the Sheffield-based Nuclear Advanced Manufacturing Research Center, which manufactured the rear sub-frame for the car, a large complex assembly which sits inside the exterior Titanium skin. 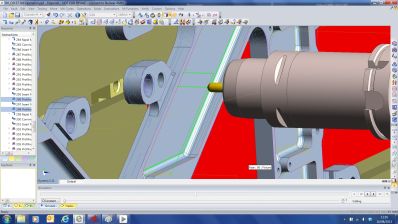 While the typical machining tolerance for milling was ± 0.1 of a millimeter, some of the wall thickness tolerances were ± 0.05, and hole diameters down to ± 0.025. "Also, the original billet of aerospace grade 7075 aluminium was 80mm thick, and the finished component is 20mm, with some minimum wall thicknesses just 6mm. Removing such a large amount of material while maintaining the flatness and shape of the component over that size and envelope of machining, was quite a challenge."

Couple that to the fact that the billet was only around 30 mm longer and wider than the finished part, and it is easy to see why Andrew Wright's experience in finding correct production engineering solutions across a variety of projects, was essential. 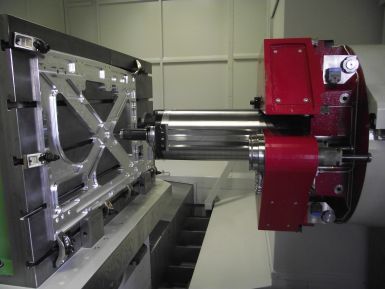 The 1.6m x 1m panels were produced by the Nuclear AMRC on its Starragheckert HEC 1800 large format horizontal boring machine.

"My main concern when I started programming was that the part would distort and we'd struggle to maintain wall thicknesses. If some of the walls became too thin, the component may not have been strong enough." But he says Edgecam's roughing strategy and profiling cycles were perfect for his solution.

"We used a three-side machining strategy of roughing one side out, rotating the component and roughing the opposite side, then we released it and re-clamped it to finish machining that side. We turned it back round again to finish the side we'd started cutting originally. That way we minimized distortion and any chance of having the walls too thin.

"I built the machine setup in a 3D design package and Edgecam allowed me to import this directly into the system. This included the part model originally supplied by Bloodhound in NX format, the modified stock model and all clamps and fixture elements. Edgecam's ability to read a wide range of model formats and to handle assemblies was invaluable, with multiple setups of the part required." 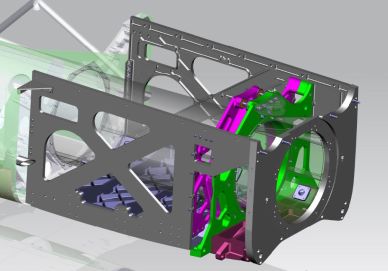 Software shows how the panels fit together to form the rear assembly.

While utilizing some 3 + 2 operations, much of the work was 3-axis milling, contour and profile milling, with 4th axis rotation to reach additional features. "Edgecam was absolutely perfect for that -- we set multiple datums, and indexed between those datums all within the same set-up. I built as much of the manufacturing process as possible into the Edgecam part files before taking it to the final simulation."

Edgecam tailored the toolpaths exactly to the features they needed to machine, particularly when it came to leaving extra material for clamping. With scant excess material on the length or width of the billet, clamp areas were required which were removed later. The toolpaths were customized around the clamp areas and extra geometry added. "Edgecam gave us perfect toolpaths which allowed us to cut very accurate profiles. 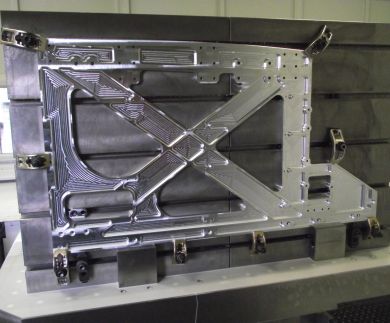 The rear panel set-up on the Starragheckert.

"With the difficult shape of the component and small amount of stock material, Edgecam's ability to tightly control the link moves and feed in / out moves between sections, enabled us to produce smooth and safe transitions between machined features and areas."

For the main machining he kept the cutting tools, all of which were supplied by Sandvik, down to a minimum. "As we were looking for a secure and accurate process rather than a high productivity operation I only used three cutting tools to do most of the milling -- a solid carbide end mill, a solid carbide ball nose end mill to finish the profiles, and a chamfer mill to deburr as much of the component as possible in the machine, which reduced manual handling." 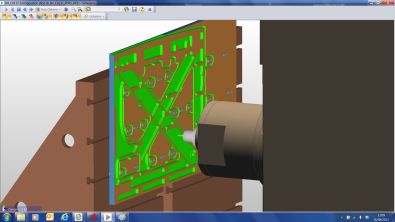 The simulation in Edgecam shows the toolpaths are all collision-free.

Edgecam's Code Wizard was another big plus for Andrew Wright, so much so, that he says they could not have produced the components in the allotted time, without it. "As we were using a brand new machine we only had a simulation post processor for its predecessor, the Starrag 1600. But Edgecam made it very easy to create, in effect, a daughter post processor for the new 1800."

He created the code using the 1600 post processor, ran a simulation and then re-processed the file for the 1800 with minimal changes. "This gave me absolute confidence in the toolpaths going down to the shop floor without having to do too much on machine prove-out, knowing that the X Y G-code wasn't affected between the two simulations."

The Nuclear AMRC was asked to undertake the machining work following successful testing by the AMRC Advanced Structural Testing Center. "Our speciality is assisting manufacturers to produce complex, high precision parts to the highest quality standards -- which is exactly what Bloodhound wanted."