Get A Grip! Here's How Hydraulic Workholding Devices Clamp Down on Wasted Time and Material

Whether for machining cumbersome workpieces, or machining operations that require precision finishing in a production environment or machining center, hydraulic vises and similar workholding systems offer a highly flexible and stable fixturing solution that can speed up work cycles and also cut down on waste. 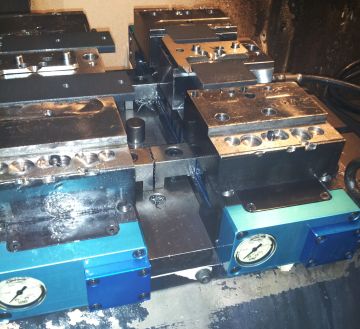 In many situations today the machine shop can simply not afford to apply traditional mechanical vises and other clamping devices to hold workpieces in place. These include instances where it would very difficult to manually mount and apply the necessary consistent-and-even clamping pressure to workpieces, thereby risking movement or vibrations that could render workpieces into scrap.

"In the past, one machine shop was having some difficulties machining welded beams that were perfectly straight -- using a mechanical vise setup," says Larry Johnson, president of Special Machined Components (Mason, Ohio). "Due to the size of the workpieces, mechanical vises were tough to load and control. I understand that they had to scrap quite a few of the beams during the first two or three months of production, perhaps 50 of them. However, at our shop, thanks to our hydraulic workholding system, I don't think we've had to scrap 10 workpieces over a 12-year period, certainly a huge improvement over the mechanical vises." 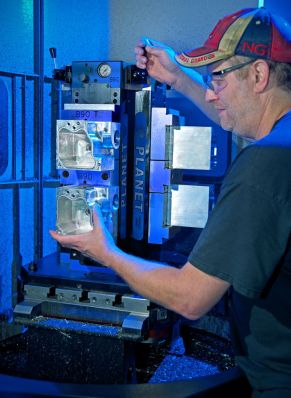 That took place back in 2001, when Special Machined Components began machining beams for heavy-duty vertical lifting systems. The lifting systems, which normally use four or six of these beams, are used to raise heavy vehicles such as trucks, buses and fire trucks overhead for maintenance purposes. Naturally, consistently precise machine finishing was required for every beam, which needed to support from approximately 15,000 lbs. to 40,000 lbs. each, providing a total lifting capacity of 160,000 lbs.

The hydraulic workholding system that Johnson's company installed in 2001 was a six-vise stacked ProHold model manufactured by Planet Products (Cincinnati, OH) that is used by some job shops for welding and riveting as well as machining operations.

One of the problems of using a mechanical vise for large or heavy workpieces, such as those that are machined by Special Machined Components, is that it is difficult to set up the machine for consistent clamping. For example, if a powerful 300-lb. operator is working the first shift, then a much smaller man takes over on the next shift, there is likely to be a difference in the clamping power between the two shifts. 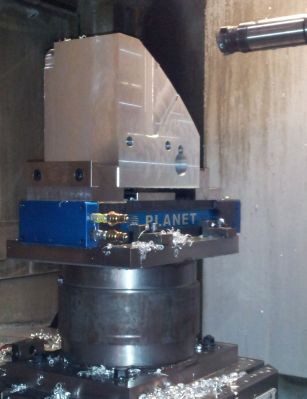 Also, over-clamping, or clamping a vise too hard, can create workpiece distortions, which results in wasted material and production time.

Those who are using hydraulic vises are quite often applying them to production runs, where the consistency of clamping grip and ease and quickness of operation are most important. You simply set the pressure, and it holds each production workpiece the same way.

"Our hydraulic vises have a pre-set, automatic clamping and release mechanism," says Larry Johnson. "You just open or close the valve on it and the jaws open and close. Because we've got six vises on our system, we have one valve for controlling the front three vises, and another valve to control the back three vises. You just have to flip a valve and that opens and closes it. It's really easy to operate." 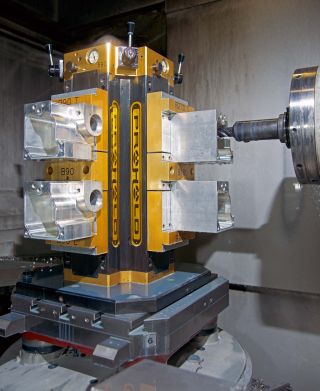 The powered opening allows a 400 lb part to rest on the vise and always open. This typically would not happen with a spring return vise.

Johnson says the mechanical workpiece vise would be much more difficult to operate adequately for his application.

"Doing this kind of work would be a really tough job if you were using mechanical workholding fixtures," he explains. "These beams we are machining weigh about 400 lbs. each. To use a mechanical vise you'd have to use a hammer to go around and make sure they're tight enough. With the hydraulic vises, we've got much better control, and no concerns about operator errors. Using the ProHold hydraulic I've never had a problem with workpieces coming lose. The hydraulic system is the only way to do it. It's more expensive, but pays for itself."

ProHold is one of the more established brands of hydraulic workholding systems, and was acquired by Planet Products in recent years. Planet, known best for its live tools and "speeder" tool heads, purchased ProHold because the line accommodates individual setups, machining centers and automated centers, and also because ProHold workholding systems offer some distinct features. 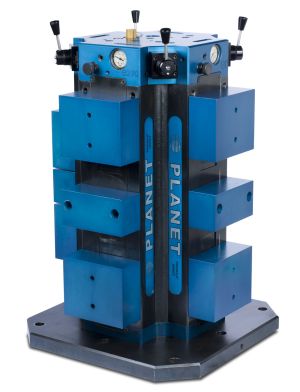 For example, the vises have a longer hydraulic stroke, which can facilitate quicker loading plus ability to clamp wide range of parts with same tooling. The long hydraulic stroke allows several different sized parts to be processed with the same top jaws, significantly reducing set up time and effort.

"That definitely makes a difference in our application," says Johnson. "Our workpieces -- the beams -- weigh about 400 lbs. and the vises open up wide enough that you can load them quickly and easily."

He adds that automatically closing the vises simultaneously saves time and effort. Each set of jaws moves independently and can clamp different sized parts at the same time with uniform clamping pressure.

"The hydraulic vises that I have will accommodate all three different sizes of the beams we machine," Johnson says. "So, if you are running the same types of parts like we are, the hydraulic vises are an easy setup. It's just a matter of changing the jaws on them and you're ready to go again."