World's First 3D-Printed Car Reduces Number of Parts From 25,000 to Less Than 50 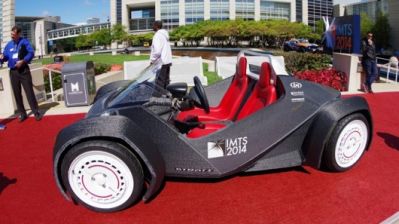 Called the Strati, the car took a victory lap around McCormick Place on the last day of IMTS with Local Motors CEO John B. Rogers, Jr., at the helm, accompanied by Doug Woods, president of AMT.

The Strati was built in three phases during the six-day show. In phase one the car was 3D-printed on a Cincinnati Incorporated BAAM (Big Area Additive Manufacturing Machine) over 44 hours using cutting edge technology called additive manufacturing. Phase two, known as subtractive manufacturing, included one day of milling on a machine provided by Thermwood. Once complete, the third and final phase was rapid assembly, in which a team led by Local Motors put the finishing touches on the world's first 3D-printed car. Then, the key was turned and the vehicle set off on its maiden voyage, marking an important moment in history.

"At Local Motors, we are changing the way people move," said John B. Rogers, Jr., CEO and co-founder of Local Motors. "Using 3D printing, we have re-imagined how cars are created using modern manufacturing techniques. The results are astounding. We have reduced the amount of car parts from 25,000 to less than 50, proving that we can take a car from designed to driven in less than six months. That is the game changer in the automotive world."