With the design stage now complete, the creator of the EZ Lift Shovel is looking for a company to manufacture the product.

The EZ Lift Shovel is designed to alleviate the most strenuous part of shoveling: lifting and emptying a heavy load. The new invention is a combination of a shovel, a dolly (to aid in lifting and moving a load), and a hopper/dumpster (to easily release it). 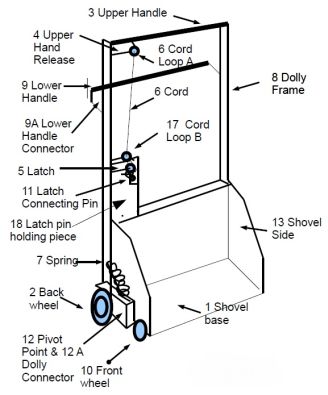 Once the shovel base is filled with snow, dirt, sand, or other materials, it is pushed or wheeled to another location. But, rather than tossing the contents by hand as with traditional shoveling, the dolly-like handle is tilted back, and the latch (holding the shovel base upright) is released. Gravity then tips and empties the shovel, because the pivot point is located toward the rear (not middle) of the shovel side, as with a hopper (or dumpster).

The top (or front)-heavy load tips without any added assistance, discharging the contents. Then, by moving the dolly-like handle upright, the springs (on the side of the unit) help snap the shovel base back into place, locking in the latch connecting pin, making it ready for the next load. 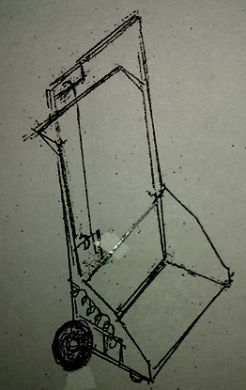 According to a seventeen-year study in the January 2011 issue of the American Journal of Emergency Medicine, there are an average of 1,647 deaths and 11,500 shoveling-related injuries and medical emergencies in the U.S. each year. The Washington Post reports that there were more than 34,000 people treated in hospital emergency rooms for injuries related to snow shoveling in 2012. Unfortunately, the design of the snow shovel remains almost the same, several decades later, along with the needless deaths and injuries.

There are many who cannot afford the high cost of a snow blower, snow plow, or a professional snow removal service. There are others who don't want the hassle of a engine-powered device, which carries dangers of its own.

While every shovel is able to push snow, what is most needed is a way to handle the strenuous lifting along with the dangerous bending and twisting which occurs in an effort to throw the heavy snow (and other materials) from the shovel.

The EZ Lift Shovel removes the most dangerous part of shoveling -- the lifting and tossing of snow, dirt, or any substance which needs to be moved. It does it easily and quickly without gas, battery, or electric power.

This design can also be applied to manufacturing wheelbarrows to load and discard materials with less effort, instability and lifting than a traditional wheelbarrow.

The cost to manufacture the shovel should be well below the price of machine-powered devices, allowing it to be more readily available to the average consumer. The EZ Lift Shovel will not only make a strenuous task much easier, but it also has the very real potential to prevent injuries and save lives.

The designer can be contacted at the email below.