3DViewStation ships with current and mature CAD-importers for a broad range of formats including i.e. Catia, NX, Creo, SolidWorks, SolidEdge, JT, 3D-PDF and STEP plus an extensive set of functional tools to view, analyze and communicate 3D-data as i.e. STEP, JT or 3D-PDF. 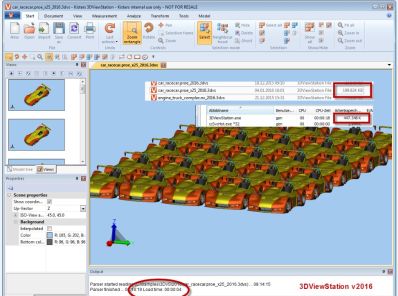 The focus of V2016 was to further optimize the handling of extremely large assemblies and enhancements of the analysis functions.

The graphics kernel, which is a KISTERS development, has been optimized again to cut down load times by 50 percent in 3DVS file format and to reduce memory usage by 60-70 percent. Also the file size of 3DVS files has been reduced by 20-30 percent.

As an example, a complete truck, being more than 3 GB of JT pure tessellation file will be reduced to 450 MB in 3DVS file format and will load in 10 seconds on an i5 notebook computer, using less than 500 MB memory. Handling and analysis of this model is working fluently.

There have also been other enhancements: