Family-Owned Iowa shop learned that by using high torque retention knobs to minimize the expansion/deformation that happens at the small end of the taper, they could significantly increase tool life, production rates, and revenue.

A workhorse in today's high-speed CNC machining centers, the retention knob and its relationship with V- flange toolholders can present critical productivity issues for manufacturers due to toolholder expansion. Once expansion occurs, the holder will not pull all the way into the spindle and the tooholder can't make contact with upwards of 70 percent of the spindle surface. 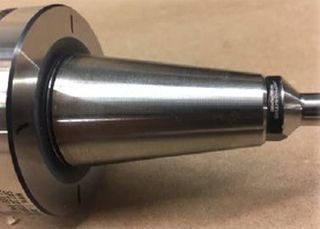 At the core of this quandary is what happens to the toolholders when they are tightened -- as overtightening the retention knob by even a mild degree can be enough to produce a bulge in the narrow end of the holder.

This often results in the toolholder losing the shape that matches the cone of the spindle -- rendering it free and seating insecurely in the machine. Tight tolerances are essential in high-speed machining, and if the toolholder doesn't fit the spindle precisely, decreased productivity and reduced tool life are inevitable.

Whereas the retention knob is an unmistakably critical component of the machining process, conventional retention knobs, when installed in a toolholder, may deform the precision taper because of the elastic nature of a toolholder's thin walls. This taper deformation prevents a toolholder from properly mating with the spindle of a CNC machine.

JM Performance Products, Inc. (JMPP: Fairport Harbor, OH), a manufacturing innovator of CNC mill spindle optimization products since 1966, has been spearheading the charge to overcome this manufacturing bind with its "High Torque" or lower-deformation retention knobs. An essential element of the patented design is a knob that is longer and reaches a little deeper into the holder's threaded bore. As a result, all thread engagement occurs in a region of the toolholder where the diameter is large, and where there is correspondingly more material to resist deformation.

The CNC router system was designed to run at a high-speed spindle machining standard of 18K RPM for speed, accuracy, and repeatability. For years, however, Morgan Meredith's President, Morgan Karns, had experienced problems with the taper series toolholders in the tool holding spindle.

The conventional retention knob's small end of the taper kept pushing the toolholder out of the spindle by a small amount. Morgan originally thought that swelling was the issue, but a bulge in the back of the toolholder due to deformation was revealed as the actual cause.

Notably, 1" brown fretting rings appeared around toolholders and on the front edge of the spindle. The machining system's high-speed rotation caused friction, which resulted in the iron oxide rust corrosion rings. This corrosive friction also produced an intense 'screaming' effect from the machines which required workers to use protective ear plugs. Most importantly, these corrosive elements continually wore out the spindle socket and toolholders -- which required frequent and costly tool changing.

A long chain of process parameters were also affected due to toolholder deformation including: z-axis drift/height drift cutter changing, elevated spindle temperatures which caused the previously mentioned fretting on the contact surfaces, and skidding/sliding effects. All of these issues related to a single source problem -- toolholder deformation in direct connection to the conventional retention knobs.

Faced with this onslaught of toolholder obstacles, Karns, enlisted JMPP to analyze their high-speed milling center production dilemma and engineer a solution. JMPP's Technical Team immediately performed toolholder tests with JMPP's Taper Shank Test Fixture. This conclusive test revealed that the toolholder was out of tolerance and thus, a special configuration solution was recommended to optimize the fit to overcome the toolholder expansion/distortion issues. 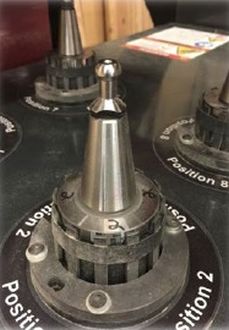 The solution was JMPP's patented High Torque retention knob, which works by making the retention knob as long as possible to fit the toolholder, includes a precision pilot, increases the undercut length, and designs the threads to be balanced. When properly installed with a retention knob socket and torque wrench, this patented design prevents toolholder deformation.

Additionally, a calculated torque value for installation is provided to ensure the knob is installed to manufacturers specifications. This is vital in applications where the RPM of the tool is high, thus ensuring that the toolholder will not pull out of the machine.

The accumulated synergistic effect of these design elements eliminated the expansion or distortion of the small end of the tool holder -- ultimately allowing Morgan Meredith to run its CNC router machines at faster speeds and feeds to realize substantial savings vs. conventional retention knobs.

According to Morgan Karns, "The results were immediate in machining with a 3/8" diameter carbide bit into solid acrylic. The machine and toolholders show incredible improvement in taper contact quality, as the tool holder has close to 100 percent contact."

In September of 2016, Morgan Meredith, Inc. converted all of its CNC wood router milling centers to JMPP's High Torque retention knobs, with approximately 50 total knobs in service running all day at 18K RPM. 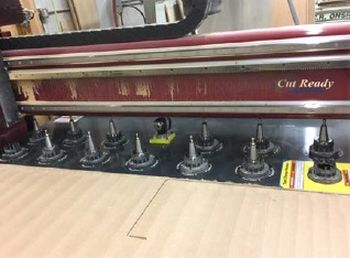 Karns concluded, "We'll be using the High Torque retention knobs exclusively moving forward, as they've solved a host of problems we've been trying to overcome for years. They also protect the spindle on the machine, do not change the nose shape of the spindle, and there are no corrosive brown rings at all now."

Morgan Meredith, Inc. is a small footprint of success from which a myriad of larger manufacturing entities and market applications (automotive, aerospace, medical, etc.) have been implementing JMPP's patented High Torque retention knobs.

Over 750,000 CNC mills have been put into service in the past 15 years in the US and the fact is, many of the toolholders will expand when a traditional retention knob is installed. As more end users begin to understand the retention knob's critical role as the interface between the toolholder and machine spindle, they will progressively move towards converting to the High Torque retention knob.

Typical CNC milling centers are running machines 20-40 percent slower than they should be. If you are able to significantly increase the speed of machines via eliminating the deficiencies of conventional retention knobs vs. JMPP High Torque retention knobs, conservative estimate savings of 10-15 percent can be achieved.

According to JMPP President John Stoneback, "Many corporations are not aware that by simply minimizing the expansion/deformation that happens at the small end of the taper when over torqued, significant increases in tool life, production rates, and revenue can be achieved. These are goals that are easily in reach -- ultimately presenting a unique opportunity to promote reshoring for US machine tool die/milling manufacturers."