Electric aircraft manufacturer, Eviation Aircraft, is using Stratasys 3D printing to accelerate its R&D process for everything from prototyping to tooling and evaluation of production parts. Eviation has saved several hundreds of thousands of dollars and months of workforce hours with 3D printing to make the project possible. 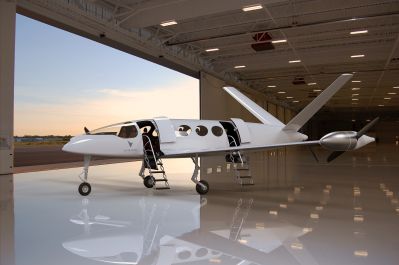 Eviation electric aircraft designed to take 9 passengers up to 1,000km at more than 240kts -- all at the price of a train ticket.

"In the next four years, Eviation aims to make regional air travel a cost-effective and clean option that rivals any existing form of transit today," says Eviation founder and CEO, Omer Bar-Yohay. "With people working and commuting across greater distances than ever before, we believe the solution will bring mid-range cities like Seoul and Beijing, or London and Paris, closer together through all-electric air travel."

There is a race in the aviation industry to develop electric and hybrid-electric commercial aircraft, so to gain a competitive edge, Eviation integrated Stratasys 3D printing throughout its R&D processes.

The company took a "start from scratch," holistic approach to the engineering of its electric commuter aircraft. The entire development process -- including aerodynamic testing and the propulsion system -- was redesigned to maximize the efficiency of electric flight. Stratasys 3D printing enabled the company to test many of its designs long before it needed to invest in actual certifiable parts, resulting in accelerated processes and more innovative designs, as well as significantly reduced engineering costs. 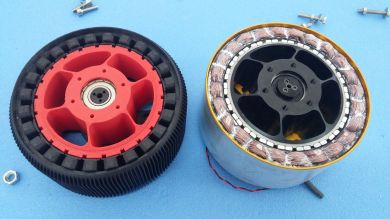 3D printed version of the wing tip motor (on left), produced in 20 hours on the Stratasys Fortus 450mc Production 3D Printer in FDM ABS material, used until final motor (on right) was delivered.

"Our ability to create new iterations of designs with 3D printing and see how they perform in real-time is helping us reduce critical capital costs, even as we accelerate our rapid prototyping phase," explains Bar-Yohay. "The kind of highly iterative, in-house manufacturing process that Stratasys 3D printing has refined is crucial to the life of a company in the constantly changing, and highly competitive, transportation space."

For example, Eviation 3D printed its wing-tip motors in a matter of hours, enabling swifter design and functional evaluation, while waiting for the final motors to be shipped. Another key aspect of Eviation's design is its ability to reduce interference drag on the exterior of the aircraft by employing smooth, curved surfaces. Eviation was able to create the required strong, geometrically complex, lightweight parts to support these surfaces by 3D printing a composite lay-up tool in ULTEM 1010 material, which was then covered with carbon fiber.

"All in all, in two years of operation we have saved several hundreds of thousands of dollars with Stratasys 3D printing and I would estimate six months or more of workforce hours, which made this project possible," adds Bar-Yohay. "Today we are using the technology for prototyping test parts and tooling; the ability to produce lightweight parts in complex geometries will also enable us to explore the possibility of 3D printing parts for the final aircraft."

Eviation is expecting to begin flight testing in late 2018 with commercial availability slated for 2021.

"Eviation is a great example of how 3D printing promotes in-house innovation and can accelerate what is typically a long and expensive development phase for both start-ups and mature companies. This enables them to develop new concepts and produce working prototypes quickly, without racking up significant costs up front," says Zehavit Reisin, Vice President, Head of Rapid Prototyping Solutions Business Unit, Stratasys.

"Our extensive experience in aerospace -- ranging from prototypes and tools to the use of our technology for flight-certified aircraft interior and launch vehicle components -- makes Stratasys solutions an optimal fit for aviation companies looking to improve cycle time and development efficiency, while pushing the envelope of innovation."